Explaining Death to Little Ones 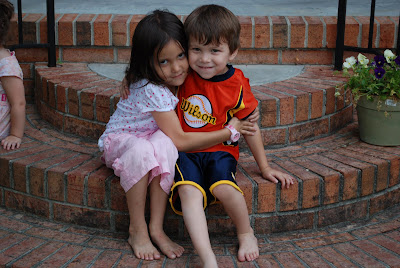 One of the hardest parts for us in losing a baby to miscarriage was explaining it to our younger children - namely Grace and Tyler. We didn't need to say anything to Isabella because she is too young to really understand. Kian and Christian are mature enough to know what was going on so we kept them in the loop as we went to the hospital to find out what was going on. I knew that Grace and Tyler were anxiously awaiting the arrival of the new baby. They were already planning on the things that they would teach the baby and how they were going to help feed, dress, and play with it. That is one of the reasons it was hard to tell them. The other was that they don't have a good grasp on what death means yet. So how do you communicate death to little ones? Here is what I told them.

I told Tyler that his baby brother (we didn't find out the gender, he just wanted a baby brother) was so cute, that Jesus just couldn't wait and took him straight to heaven. Then I told him that someday when he goes to heaven a little boy will run up to him grab his hand and say, "Hi Tyler, I have been waiting for you. I'm your little brother." Then he would lead him around and show him the best places to play. This put a big smile on his face. I basically told Grace the same story except it was a little girl instead of a little boy.
Posted by Sean Ransom at 5:05 AM No comments:

The Other Side of the Curtain

I could hear the rapid sound of a baby’s heart beating coming from a monitor on the other side of the curtain. I looked in Jessica’s eyes to see her response. I know what she was thinking; we were both hoping to hear that coming from Jessica’s womb today. However, we would not hear that beautiful sound this time. Jessica started spotting a few days earlier, but wasn’t too worried. After having five kids you know what to expect. She had spotting with at least one previous pregnancy so we knew that spotting happens sometimes. Plus, she was not experiencing any pain or cramping. Last night the spotting turned into bleeding and this morning it started getting heavier. For the last two days, Jess was searching the internet to see if others had this same experience. She was comforted when she found out that even heavy bleeding does not necessarily mean the worst. We drove through the busy Manila streets to see the doctor for an ultrasound. Seeing and hearing the baby would confirm that everything was alright.

After having almost 20 ultrasounds over the years we have become pretty good at being able to make out the images and knowing what to look for and what to expect. Jessica went into the room first and the nurse called me in shortly after they got her set up and looked inside her uterus. We could see the shape of it and a mass inside of it, but it was not the baby. It appears that the baby had already passed out of her body undetected. The doctors didn’t use the word miscarriage, but we knew.

Now, the hardest parts for me is seeing my tender hearted wife heart broken and having to tell our children who were looking forward to the arrival of another baby (especially Grace). I had asked the kids to pray for their mom and the baby on our way to dropping them off at school. I just let them know that their mom was not felling well and that we were going to the doctor for a check up. Even with such little information, the boys were text messaging me and asking if mom was alright. Jess is a pretty tough girl, but I know that she is hurting inside. For me, there is a lot of consolation because we already have five children, but I believe that it is harder for a woman to lose an unborn baby than it is for a man. Going through this has given me even more compassion for couples who have miscarriages and have no other children.

We found out that Jessica was pregnant in mid July about a week after we returned to the Philippines from the States. We have now been back for almost two months, but we had not yet taken Jessica to the doctor for a check-up. As soon as we returned to the mission field we quickly got to work. Two days after we arrived we had a small short term mission team visiting from California. Then, in the beginning of August we had to get the kids prepared for starting school and at the same time we were helping with a minister’s conference. In addition to all of this we were (and still are) in the process of moving. I could tell that both of us were partly blaming ourselves for the lose. Jessica wondered if things would have been different if she had gone to the doctor. I remembered that King David lost one of his children shortly after it was born due to David’s sins and I couldn’t help thinking that maybe God was punishing us because of something I did. I don’t share in David’s sin, but maybe I didn’t work hard enough, pray enough, or was too proud. I believe that those thoughts are wrong, but it is human to have them.

As I write, Jessica is in the operating room where the doctor is caring for her and doing a follow-up procedure that should prevent infection. We hesitated having this done since Jessica has no medical insurance for pregnancy related issues for the first ten months because of our switching over to Grace Ministries International. Jessica was also hoping to just go home and let nature take its course. However, I thought it wisest to do what the doctor recommended.

We thank God for the many blessings that He has given us, more than we deserve. There are so many possibilities as to why He has allowed this to happen and we may not know why till we get to heaven, but we do trust Him and know that this is His will and that it is for our good and His glory. Because He has been so good to us it makes it easier for us to trust Him when He says no or takes something away. We look forward to seeing our little one in heaven where we will have a lot of catching up to do.
Posted by Sean Ransom at 4:08 AM 5 comments: