Lessons Learned From Our First Furlough 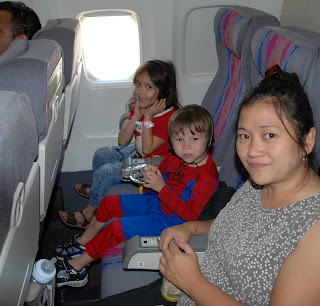 We all made it safe and sound back to the Philippines. I wanted to share some lessons that I learned during our furlough in the U.S (our approximately 7 months stay in which we reported on our progress, did some recruiting, visited family and friends, and attempted to do some fund raising).
When we first returned to the United States I expected that it would be easy to return back to the Philippines once our furlough was completed. In fact, I was eager to return. One reason was that our house and most of our belongings were waiting for us in the Philippines. The school and friends that our kids had grown t love was there. Lots of great ministries, opportunities and people were waiting for us. In spite of all these and several other good reasons to return I could feel some anxiety building as the time to leave the U.S. drew nearer. What was troubling me? What was I worried about? After all, the Philippines feel a lot like the U.S. The Philippines are so westernized that I’ve felt that there shouldn’t be any struggles living there for those of us who weren’t born there. I’ve even thought that the differences between the two countries were relatively small and that I haven’t really given up much in going to the Philippines.
Yet, there are some differences and maybe it’s these differences that have been causing me some anxiety in returning. In thinking about what might be the cause I started thinking about some of the things the challenges in living in the Philippines. There is a lot of poverty in the there, but I don’t think that is the cause because I not impressed with wealth and I don’t pity or see people as less if they don’t have money. Sometimes I even envy the freedom that those little have because they are not slaves to things like many who feel quality of life is defined by having more stuff. Another challenge is that people speak many different languages here however, I don’t think that is my problem because English is used and understood throughout the whole country by many; most of the signs are even in English. It’s not the food here because even though you can find a lot of foods that many American’s would call strange or exotic, you can also find many McDonalds, KFC, Pizza Hut, Starbucks and the like.
I believe that answer is – and this furlough has taught and reminded me – that it wasn’t easy to give up family, friends, church, and country the first time and now we have to do it again. In fact, we have to do this on rotation every few years. I now see more clearly that we leave behind many more things than I had realized at first. Many times while we were in the States I watched my kids playing with the kids of our family and friends. I remember feeling a sense of loss over the relationships that would have been if we never left the U.S., a loss of watch our family growing up with other families; camp outs, sports teams, church events, holidays, and some comforts. I appreciate more than ever having a solid church that consistently teaches the Word of God and ministers to God’s people (though some exist in the Philippines, they are more the exception than the norm). I also appreciate the U.S. more for its courts and laws – even though one could go on and on about it’s short comings in these areas – the U.S. is still a great nation and I believe that justice is still more often found than not. I will miss the cleaner streets, cleaner air, lighter traffic, organization, and cultural comforts. Here’s an illustration that might help how I feel. It’s kind of like being home on leave from war and then returning to fight the good fight. After enjoying home, you know better than ever before what you are leaving behind and the gravity of the tasks that await you.
With all that said, I want to say that there are many positives in living in the Philippines. Also, I can honestly say that Jesus is worth it and that everything that might be temporarily lost in this life is nothing compared to gaining an unending joyous relationship with God and what He has waiting for us in heaven. I agree with what Paul wrote in Philippians 3:8 (ESV) where he said, “Indeed, I count everything as loss because of the surpassing worth of knowing Christ Jesus my Lord. For his sake I have suffered the loss of all things and count them as rubbish, in order that I may gain Christ.” It is that knowledge and our joy in seeing the fame of Christ spread throughout the world that makes it easier to lose things again and again.
Posted by Sean Ransom at 1:53 AM 1 comment: