I knew the "what", but now the "how" is getting clearer

I went to Thailand feeling good about what God had done through us in the Philippines over the last couple of years. While studying Tagalog fulltime, we were still able to lead a bible study at our house and start another one among the poor living under Manalo bridge. Having just finished the classroom part of my Tagalog learning, (with the exception of an optional course) Jessica and I found ourselves at a crossroad. What next? Actually we knew the 'what', we have known for years, even before we arrived here we knew that God called us to train and send men and women from the Philippines to reach the Philippines and everywhere else Filipino's are scattered abroad to work. The question we are looking at now is "How?" Do we plant a church first and from there, some time in the future start the training center? Do we work in and with an established local church and start the training center through it? We could also just go straight to work on establishing a training center.

I felt excited about all those options and was open to others, but seeing positives and negatives in each kept me from rushing into a decision. I decided to wait on the Lord for an answer as we prayed about it, sought counsel, and learned more about the different ways to do the 'what' that God has called us to. It was in Thailand that I believe God put me on the path to the next step. After talking with the leader of our mission and the South East Asian overseer of the Evangelical Free Church Mission, God began to work in my heart. I told them the three options that I mentioned earlier and they encouraged me to pursue what they called the 'big rock', the vision that God gave me before coming out here. They said that training and sending nationals to plant churches is much more strategic than Jessica and I planting them ourselves.

We were planning to plant a church over the next five years or so to get more experience in that area. We thought that was the "how" in begging a training center. However, my boss pointed out that I can still help in church planting with the people under the bridge, (and even other church plants that the church we are working with is doing) but, I will multiply ministry if I focus on training nationals to be pastors, church planters, disiplers and missionaries. He said that once the training center is established I can always bring in seasoned church planters to teach modules to train the men that I work with if they need more teaching than I have to offer. This all made a lot of sense, but Jessica I have to admit that it is taking a little while to get used to since we had thought for so long that we would be leading a new church plant to start off.

As I was processing this path to the "what" I starting thinking about how I should proceed. The leader of my mission suggested that I talk with another man who was attending the conference. The next day I met him for breakfast and shared my vision with him. He is currently training men to plant churches in Indonesia. I talked with him about partnering to train and send people from the Philippines to reach the world for Christ. It turns out that it part of his vision as well. He suggested that I start trying to train and send 10 people to Indonesia. As I go through that process, he said, I will be able to develop a working model that I could expand. From there I can seek partnerships with other Evangelical Free Churches and groups to train and send more men throughout Asian and Arab countries. In his case, he would take the men that we train in the Philippines and place them on church planting teams in Indonesia. It seems that the "how" is getting clearer now. Pray for us as week seek to train and send more workers into the harvest.
Posted by Sean Ransom at 10:55 PM 1 comment: 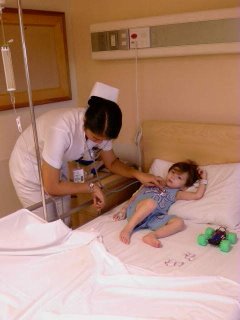 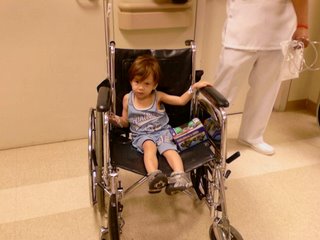 Even though it was not fun watching my son struggling to breathe, vomitting, and getting poked by various needles, I have to thank God that we are blessed with good medical care. I am also grateful that Tyler's asthma acted up here at home and not in Thailand where we do not know the language or our way around. Around last Thursday Tyler started running a fever, coughing, and vomiting. Once he fell asleep it seemed to settle down, but on Friday night his breathing became labored. I took him into emergency at about 3am. After arriving in the ER he seemed to be doing better and I started thinking, "It figures, when they examine him everything will check out fine, they'll send us home, and then things will flare up again." However, after about 2 minutes in the ER he vomited on himself and me. Coupled with a fever and labored breathing they decided to admit him. His fever got upto 103, but once they gave him some paracetemaol and got an I.V. with antibiotics and fluids into him his temperature stabelized.

Ty and I spent the next three days in the hospital. Although we had some nice cuddle time and I was there for him when he was being poked and proded, he asked about mom and grace a few times. Jessica and the rest of our kids visited us each day, which really lifted Ty's spirits. 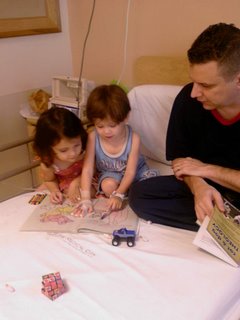 Ty hadn't really eaten anything for two and a half days . The I.V. helped rehydrate him and by Sunday his appetite seemed to come back. We were released today (Monday) and will return for an office visit on Thursday so that the doctor can check on him and help us determine a plan to help prevent him from having any more major attacks. Please keep Tyler in prayer over this.
Posted by Sean Ransom at 2:09 AM No comments:

Where Have I Been?

I'm sorry that I have not been able to keep my blog up lately. I have been here (mostly), but my internet has not. Apparently there was a 7.1 earth quake in Taiwan that damaged fiber optic lines that carry internet traffic from South East Asia. I has been very difficult for us to send and receive email and impossible for me to blog. I couldn't stand it any longer so I drove to our down town office to use their internet connection which I heard is better than ours. That appears to be the case because for the first time in almost a month I could actually log into the blogger web site. A lot has happened since my last blog. We just got back from our missions annual conference. This year it was in Thailand with the rest of the South East Asian missionaries from our group. We spent the first four days in Bangkok and then flew to Chaing Mai for a week long conference. We had a great time seeing the beauty of the country, spending time together as a family, 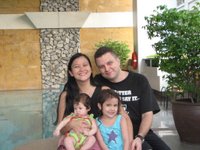 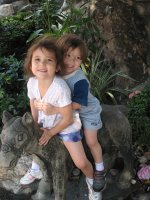 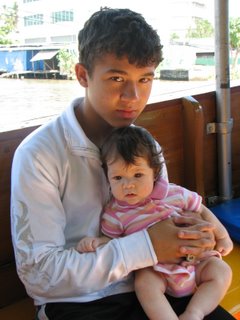 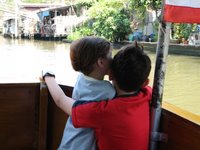 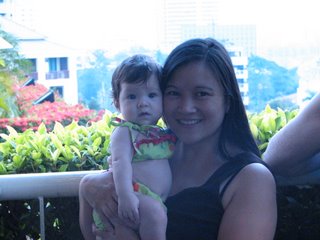 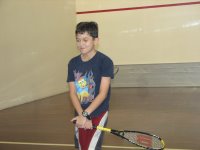 meeting other missionaries from all over Asia and getting some inspiring and motivational teaching from our leaders from the U.S. In Bangkok we visited many Buddhist (probably the largest religion in the country) temples. I kept thinking about Paul in Athens when I saw the many idols that filled the country. I couldn't help but fell bad for the many lost souls in this country who are worshiping false gods. Praise the true God that we have some new church plants in the country as well as a bible school. Pray for the believers in Thailand as they try to reach the lost in a country that is very resistant to the gospel. 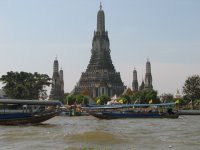 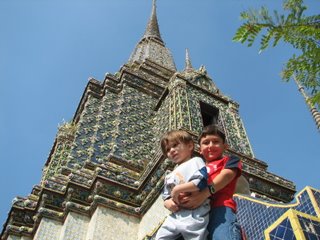 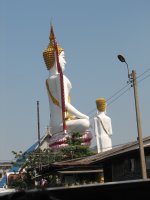 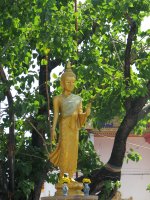 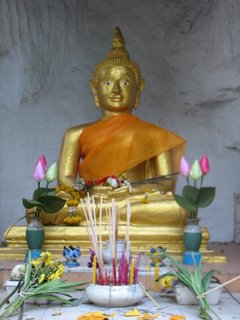 In one temple that we visited, there was a golden statue of Buddha that was about as long as a football field and about three stories tall. People were on their knees praying to it, touching it, and giving money to it. I saw a crack on one side of it and wondered if any one else thought about the power or lack of power that a wooden god has who is dependent on men to keep a fresh coat of paint on it to hide it's imperfections. 1 Samuel 5 popped into my mind when I saw that Idol. I remember how the Ark of God was brought into the temple of the false god Dagon. The Bibles says that when the Philistines went into the temple the next morning, "When they rose, there was Dagon, fallen on his face on the ground before the ark of the Lord! His head and hands had been broken off and were lying on the threshold; only his body remained." 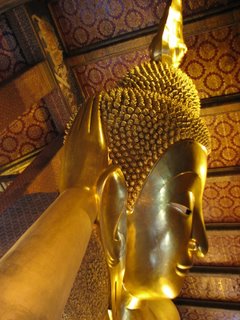 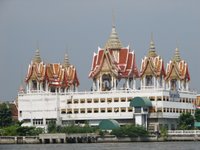 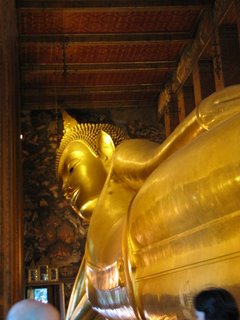 I hope you enjoyed these pictures. Perhaps when our internet is working well again, Jessica will post some on our family web site (www.ransomreport.com). We had a great time and God gave us some great counsel regarding our next step in ministry in the Philippines. I will write about that the next chance I get.
Posted by Sean Ransom at 1:17 AM No comments: