It was a long process, but it was worth the wait. Jerwin may no longer feel the need to let his hair hang down over his right eye now that we were finally able to get a prosthetic eye implanted. His implant was relatively cheap; $60 plus about $100 for medications. Although 160 dollars may not be a lot of money for you or I, it is a lot for Jerwin and his family. Perhaps that is why they never dreamed that they could do anything for his damaged eye. His mom earns about 3 dollars a day and at that rate it would take over 50 days of her small earnings to pay for the implant. That makes it basically impossible for her and her four children to survive. Thanks to all our supporters, we were able to minister to them by covering their expenses and shuttling him back and forth to the hospital. The picture below is of Jerwin a few months ago. After they scraped off several layers of his eye. His eye lids began so drop making it look like he was squinting. 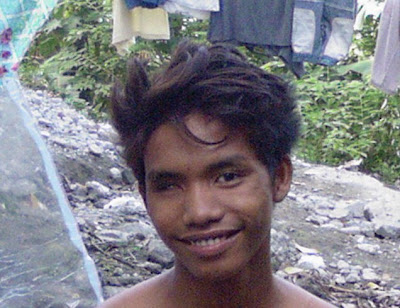 I posted this picture on an earlier blog. This is Jerwin and his older brother JR at the East Ave. Medical Center where he was going in almost weekly to prepare his eye for the implant. 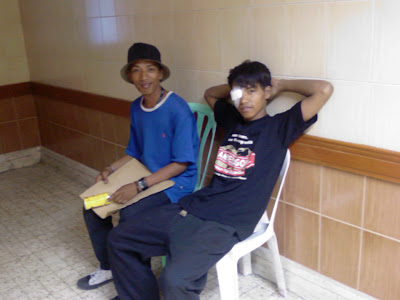 They finished Jerwin's eye while I was in California for some studies. Here is a picture that Jessica emailed me of how Jerwin looks today. 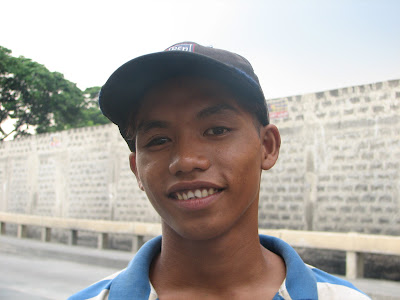 I hope that this will increase his confidence, but more importantly I pray that it will be a testimony of God's love for him and his family. I just learned that Jerwin's brother Oliver wants to start bible college which we about and we are excited to support him through. I will write more about that later.
Posted by Sean Ransom at 2:46 PM 1 comment:

A Room for Pastor Rick

This post originally appeared in our newsletter, but I thought that I would post it on my blog as well...

If I had opened that door three years ago I probably would have jumped at the sight of what I saw. The small room greeted me with about a half dozen flying roaches. These were big ones, not like the vertically challenged ones I’ve seen in the Like their cousins from the States, they took off running when the lights came on and they were fast. I stepped in the 9 X 6 foot room (approximately) followed by Pastor Rick. Even with its one florescent light it seemed kind of dark. The cement floor is uneven, it has a low ceiling, no bath room and the kitchen consists of a small 1 X 2 foot shelf looking thing sticking out of a wall with a drain tube running from the bottom of it and outside through a small hole in the wall.

Inside I was feeling bad about the question I was about to ask. “Pastor Rick, is this room okay for you then?” He had called me the day before to let me know that he found a room and wanted me to check it out. He told me that the rent is $32 dollars a month including electricity and water. That is actually $18 a month less than our budget. In answer to my questions about the room Pastor Rick said that the room would be fine. I reminded him that our budget allows for a little better room, but he said this will do for now, maybe we will find a better one latter. I paid his first month rent and a security deposit. We bought him some plates, dishes, cups, eating utensils, a fan, a pot and pan, a gas cooking stove, a foldable foam sleeping mat, and a few plastic chairs and table.

When I asked where the bathroom is located, I learned that he has to share one with four families (probably large families) and that it is located somewhere outside. I suspect that one of the reasons that he wants that particular room is not only that it is located just around the block from the bridge, but that it is situated in a large community of squatters. Although it is a relatively small area, maybe a couple of city blocks, there has to be easily a thousand people living there. I was surprised when several of the residents there recognized me.

We plan to have Pastor Rick start another bible study by his rented room along with another one in a near by neighborhood. We will also have monthly outreaches like showing the Jesus film and other movies with my projector and a generator that we plan on buying soon. Pastor Rick and I also plan on training up some of the faithful at the bridge to helping us in reaching out to the surrounding communities for Christ.

Even though poverty is all around us in the , many Filipino pastors are not moved by it and would rather minister in more comfortable circumstances. They might reason that, “I can reach the poor better from an affluent church”, but it’s not getting done. I am challenged by Pastor Rick’s commitment to love those who are harder to love and to go to those who most are afraid or unwilling to go to. Continue to pray for us, and especially for this brother who is willing to carry his cross daily and to give his life for the sake of the gospel.

Posted by Sean Ransom at 2:07 AM No comments: