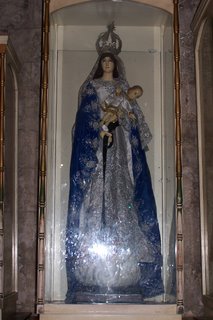 In a story called, "An Interesting Conversation - Part 1" , I mentioned that I would write more about a conversation with Robert and Ate Sylvia. After asking me if I could heal Robert, Ate Sylvia didnt wait for an answer but kept throwing more questions out. One thing she really wanted to know was what the bible says about praying to statues. This is widely practiced in the Philippines. They pray to statues of Mary, Santo Nino (Baby Jesus), the Black Nazarene, etc. As usual, we were sitting on the walkway of the bridge. I looked around and saw a piece of wood on the ground which gave me an idea. I picked it up and, as best I could in Tagalog, I began to answer her question. I held the piece of wood on the rail and told them that I could paint it, put a face on it, eyes, ears, and mouth. Then I told them I could make feet for it also and then I set the piece of wood down on its end as if standing and let it go. It just fell over on the ground. I did this two more times and it fell to the ground each time. I asked what happened? They saw that the wood had no power to stand up on it's own. I told them that in addition to not being able to stand, it could not speak, hear, or see. Then I picked it up again. Looking at it, I loudly called out to it something like, "Help me, bless me, feed me, take care of me!" They began laughing. I asked, "Why are you laughing?" They replied, "It's just a piece of wood."

"That's right", I told them, "And every time we pray to an idol we are just talking to a piece of wood which can do nothing for us." I wasn't sure if they understood all that I shared with them, but I later learned that they did when I heard them share part of the story with another missionary that I brought there to visit them. (click here to read that story). 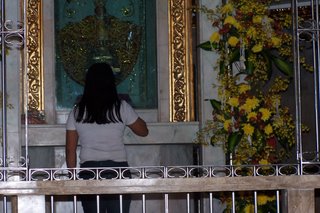 I think that illustration with the piece of wood made a big impression on them and helped them to see the futility in praying to idols. I shared with them that we should pray and worship God only. After all, He is the one who made us, who came and died for our sins, who offers salvation through faith in His Son, and who wants to be intimately involved with our lives for eternity. Why go to anyone or anything else! (Robert and Sylvia pray to receive Christ - click here to read ).
Posted by Sean Ransom at 6:16 PM 2 comments: