The Master's Academy International in the Philippines

My wife and I keep laughing as God continually drops opportunities in our laps, opening doors for ministry, granting us favor in the eyes of others, and bringing great people to us to work with. I know that all of these things are from Him because they certainly are not because of any skills or credentials that we have. Churches and minister are giving me respect I haven’t earned. More experienced Pastors and elders call me to get my opinion on ministry issues. Other Churches are opening their doors for us to use as venues for training others and holding conferences. One businessman even offered us a building to start a training center in. 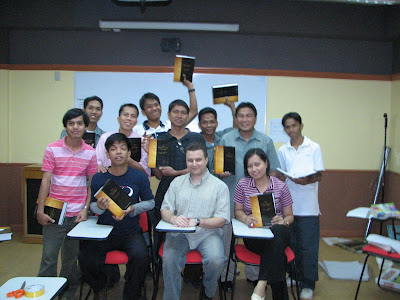 So why are churches and people in the so willing to work with us in this ministry? It started with a man who wanted to meet when he heard a graduate from the Master’s Seminary (TMS) was coming to the . Because he came to Christ through the ministry John MacArthur and Grace to you, he was eager partner in the ministry of training Filipinos in expository teaching and preaching. In November of 2006 I accepted his invitation to teach a group of about 15 ministers that he oversees. These 15 men each minister to separate groups of 700 to 1,000 people living in the surrounding poor communities. I began teaching these men on discipleship, hermeneutics and Bible. 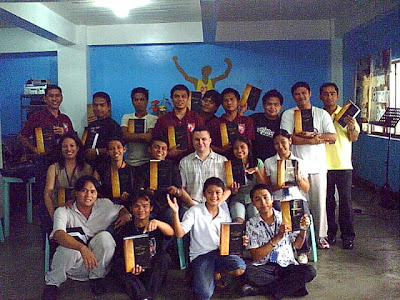 Then in August of 2007, after a friend of mine who started a bible college in his church shared with me his frustration in finding qualified teachers, I agreed to help train his students. At this time Mark

Macatangay, another graduate from TMS joined me. He is a Filipino national and an associate pastor from

Green Hills Christian Fellowship (GCF). Mark and I accepted an invitation to train some ministers from a group called “Joshua”. This group specializes in discipling people from the police and armed forces of the . The class stared with just over 30 students and soon grew to over 40. After they completed Hermeneutics they asked if we would be willing to train more of their people. We started another class of 30 plus 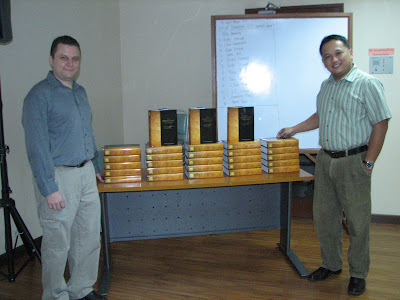 students who are currently taking Hermeneutics in the evenings (including some of the pastor’s wives). GCF provided for the copying of the syllabus for each student and copies of the book “How to Read the Bible for all it’s Worth.” Supporters of our ministry from the provided copies of the MacArthur Study Bible.

Among our students are a navy admiral, a military colonel, businessmen, engineers, bankers, and an attorney. All of them are now teachers or preachers hungry for training. After taking our course in Hermeneutics one student wrote, “Through this course I am truly encouraged to spend more time to 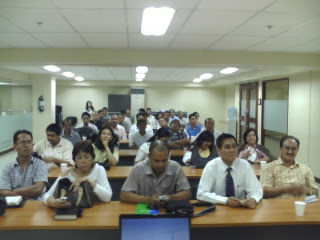 read, study and meditate on the Word of God and consequently to trust and obey Him in all areas of my life and share the meaning and the truths to others as He reveals them to me.” Another said to me that he went to a in the , but he was never taught the basic principles that we taught him in our Hermeneutics class. I heard the same thing from another pastor who received a Masters of Divinity from a seminary in . Comments like these serve to fuel my passion for bring solid training to ministers of God and to send them out through the and the nations. 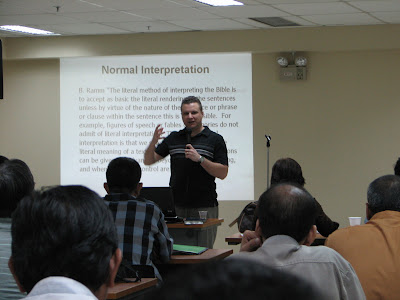 Many other groups have expressed interest in us training them and we haven’t even advertised.One of those groups is White Fields. They are a missionary organization that focuses on training national church planters using experienced missionaries and ministers to help train and equip them for ministry. They asked us if we could help them in the area of Expository preaching. You can read about their ministry in the at the following website: www.whitefields.org/currentevents/2007/StepConference.pdf. This partnership will happen 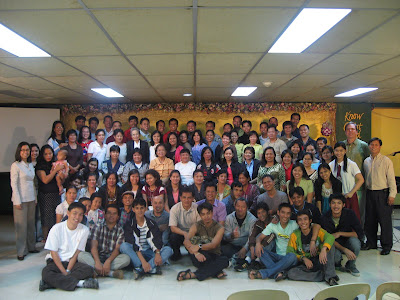 through modular training, the first of which will took place in January in the city of . Steve Wheeler from White Fields will taught a one week module in Hermeneutics to a group of about 100 ministers for one week in the evenings. Classes were held at night because the students work day jobs to survive while ministering during the evenings and weekends. We are lining up other modules in the near future for other ministers who live outside of and on other islands.

The greatest challenges that we face right now are first, we have more potential students than we can teach on our own so we need help. We need more teachers who are willing to leave the comforts of the and move to. We also need trained men who can come and help teach 1 to 2 week modules in various subjects including Old and New Testament, Theology, Church Planting, Leadership, Counseling, Pastoral ministry and Preaching. Second, we need prayer and financial support for both Mark and I, and for resources for the training center itself. You can contact us (sean@ransomreport.com) or the Masters Academy International (http://www.tmainternational.org/site/questionnaire.asp?q_id=29&sec_id=1) if you are interested in partnering with us.