Held for Ransom in the Hospital

In the past I wrote about a 3 year old little boy named Chariel who has a heart defect. At the Philippine heart center we learned that he has to has to have two corrective surgeries, but before this can happen we had to get dental work done. This little boys teeth were so rotten that they posed a potential danger to his heart. The doctors were worried that an infection in his mouth could cause problems with his future heart surgeries. Apparently, since Chariel has trouble eating and basically lives off of powdered milk all that was left of his brittle teeth were broken stumps.

This set Jessica on a search for a dentist who do the work pro-bono or at least at a discounted rate. The Lord was gracious in providing a dentist who specialized in children and who was willing to do the work free. However, due to his condition, she said that he needed to have his heart monitored during the procedure and due to his age she recommended that he be anesthetized so that he can sleep the the long and painful procedure. 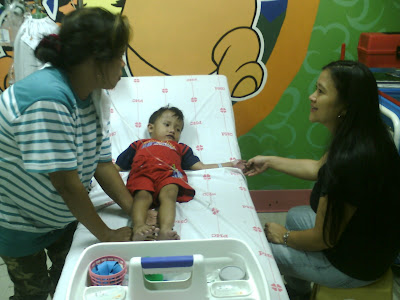 This started our second search. This time we needed to find a hospital room with heart monitoring equipment and an anesthesiologist so that the dentist could do her work. Jessica arranged a room at the Philippine heart center. They told us that they were comping the room to us and that the anesthesiologist would wave her professional fees and perform her services for free. We thanked the Lord and set a date. After a cancellation or two due Chariel being sick the big day came. 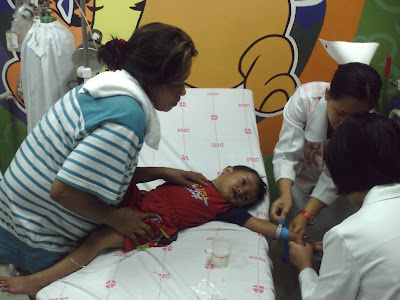 At first we were worried that we would not be able to go through with it because Chariel's blood platelets were low. They gave him a blood transfusion and retested his blood. As you can imagine, non of this went well for our little 3 year old who found the whole ordeal quite traumatic. Jessica played with him a bit, which seemed to at least temporarily get his mind off of all the poking and prodding. 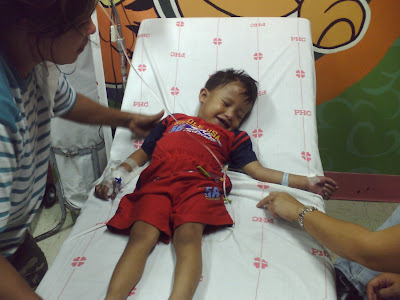 Just before Jessica and I left the hospital we decided to get an estimate on our share of the costs so that we would know how much money to bring on the following day when we checked them out of the hospital. We were told that although the doctors services were free, we would need to cover the costs of the medicine and the over night stay for Chariel. Initially, they told us that we would have to pay around 5,000 pesos (about $100 US). We agreed to that since we had the funds in our budget. A nurse called billing for our estimate and told us that it would cost about 10,000 pesos. We were surprised and the cost doubling and were considering stopping the procedure yet again. First, we went to talk to the billing department in person. They told us that since we Chariel was put in a semi private room (at about $16 a day) that put him in a new category with new prices. After we shared his story and ours, they realized that he was a charity case and that we don't have a limitless supply of money. They assured us that except for the room cost, they would bill us the rates for a charity patient and that our cost would only be about 5,000 pesos. After much struggling, we were again joyful and gave the go ahead for Chariel. Latter that evening he passed all the test and was finally ready. The dental work went smoothly and the dentist pulled all 20 of his teeth.

This is where things began to get interesting. We showed up the next day to pay the bill and bring Chariel and his parents Charita and Ariel home. Looking at the last line of the bill we didn't see the word TOTAL followed by the number P5,000 like we expected. Instead we saw
the number P43,000 and change. Really shocked, we began to investigate. We learned several things. First, a complimentary operating room and use of equipment doesn't mean free. It means that they are allowing outsiders or non-staff members the privilege of renting their stuff. We also learned that this was not a bait and switch. It is just different here, they use different terminology and certain things are understood here that are not in the US. No one was trying to deceive us, in fact they were going out of their way to help Chariel and us, but the misunderstanding was a costly one.

We began the process of appeal in the hopes that the hospital would at least give us a substantial discount. However, the doctor in charge was not there so we could not settle the bill that day. Since the bill was not settled they would not let Chariel and his family go home, they had to stay another night and we had to pay for it. The doctor in charge gave a few thousand pesos off, but the price was still almost 8 times what they originally told us. Their advice was to return the next day to see if social services could help us. They said they would help for the heart surgery, but that they could not help with the dental work. The two day dental procedure end up being a almost a week stay in the hospital. Each day we tried to negotiate the bill cost us another 800 pesos. The resolution ended up being that the doctor said he would help us to recuperate some of our cost by discounting the heart surgeries. Lord willing this may end up working in our favor as a percentage discount of the much more expensive heart surgery could be a larger overall saving. We finally paid the ransom and brought Chariel and his family home. The Lord in His kindness has already provided the money for the dental work. We are hoping that we can get the first of his two heart surgeries done before the end of this year. Pray for God's will and timing in this situation.
Posted by Sean Ransom at 5:02 PM No comments:

Labels: Missions, People at the Bridge

To Jessica on our 18th Wedding Anniversary

Drawn to her...
Maybe its her smile that lights up places,
maybe its her laugh that brings joy to many faces. 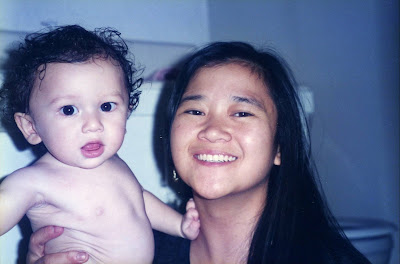 Perhaps its her tireless giving of her heart,
perhaps its the emptiness I feel when we're apart. 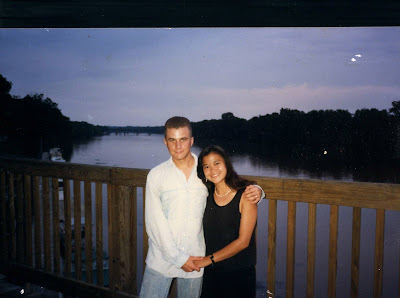 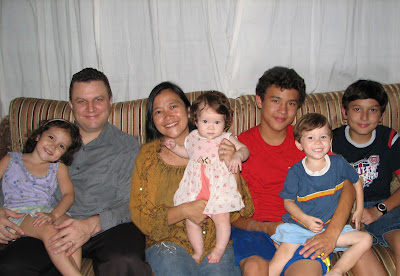 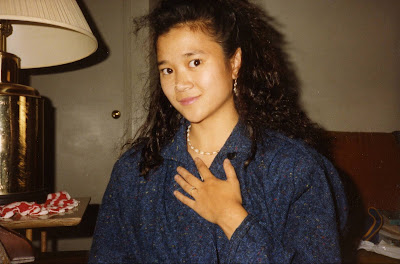 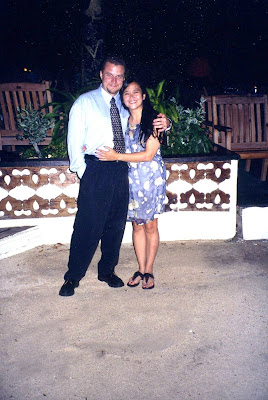 Its been eighteen years and the sparks remains,
I'm drawn to her more now,
more than when we first began. 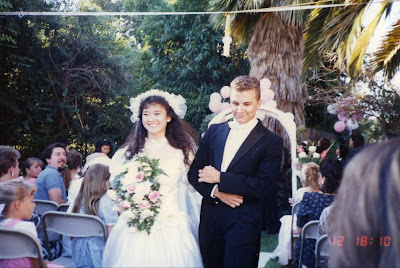 Happy anniversary Jess,
I will always love you,

Sean
Posted by Sean Ransom at 9:00 AM No comments:

The Weight of Poverty 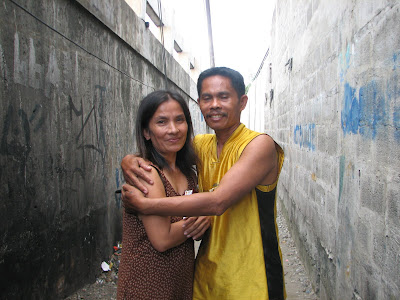 Kuya Tony's familiar smile was gone. He would hardly lift his head as I looked at him through the bars of his cell. He was not in jail or under formal arrest, but he was being held in a local city detention center. I believe that the pressures of living under a bridge and caring for a wife and 7 children was taking its toll on him. Tony was working in our neighborhood driving a pedicab (a bicycle with a side car). The $5-$6 a day that he makes is not an uncommon salary here and one in which he and his family are grateful for. However, Tony's bike has been broken for almost a month and the owner of it was not taking care of the repairs. These problems and a fight between Tony and his older children proved to be more than Tony could take. 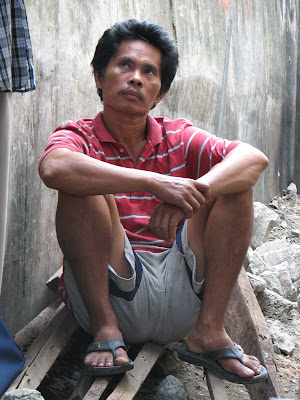 I got a text message on my phone that Tony had a break down. He was walking naked in the middle of the street before they locked him up. We I got to the lock up he was dressed and in his right mind, but I could tell that he was agitated. I was speaking fast Tagalog to me so I could n't get all that he was saying. He said, "Pastor, maraming kasalanan sa tulay" (there are a lot of sins at the bridge). He continued to tell me that some of his children did not respect him. I sat on the floor outside of the cell and tried to give him some hope. I told him that i would try to help him get his bike fixed so that he could work again. That seemed to cheer him up some. The barangay captain (a city employee) released him to us so that we could take him to the hospital. 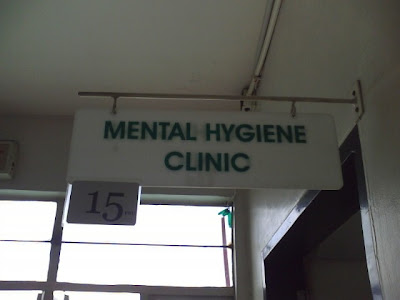 As we were taking him to the doctor I learned that he had numerous episodes like this. He was actually on medication, but He said because he was feeling so good (physically and psychologically) and because of the expense of the medicine he decided to stop taking it. The nurse checked his records and scolded him for not coming in for regular check-ups or taking his medicine. She gave him a dose and set an appointment with the doctor for the following day. I bought him a 3 month supply of his medication and we returned him to his family at the bridge. I saw him again a few days later and he looked really good. Pastor Rick is taking him under his wing and I was really nice to see them bond through these events. Pray for Tony and that he will trust in God as he struggles to survive with his family in such hard circumstances. Handling such a hard life under our own strength is more than most of us can bare. I pray that as he trusts God more and becomes more satisfied in his circumstances that he will even be able to get off his medications. Lastly, pray that he will be able to work again as a pedicab driver and that he will have a more responsible employer.
Posted by Sean Ransom at 6:06 AM No comments: