Sir, did God send you here to talk with me?

Looking my direction, she stopped what she was doing and asked me, “Sir, did God send you here to talk with me?” I told her I believe that He did and this is what he wants you to know. After formally introducing myself to her and I learned that her name is Maggie. I shared with Maggie that God loves her; He knows who she is and what she is going through. Then I told her how Jesus forgives the sins of those who trust in Him alone instead of themselves and their own good deeds.

Maggie’s eyes began to tear up as she shared a little about how hard her life has been. She seemed to be aware that God had been trying to get through to her. Although she was raised Catholic, she had attended a Christian fellowship a few times, but said that it is difficult for a person in her circumstances to get to church. She also explained that she does not have a bible and that she couldn’t read it even if she had one. You see, this conversation started when I asked her if she has been blind since birth or if she had lost her sight during the course of her life.

God had brought me to her through my sore back. I was hurting that day so I stopped by a place in the local mall where for about $2.00 a trained blind person will give you a massage while you sit. I have had massages there before, but because they were so busy that day they asked if I minded if a woman gave me the message. I said okay, and took my seat. They massage people in an open hall way that has several chairs lined up in a row between a movie theater and a barber shop. This was the first time that they had a woman give me a massage and I didn’t think anything of it at the time. 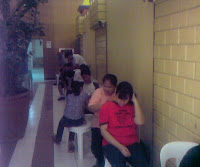 As Maggie explained to me about her eyesight she told me that her husband had physically abused her and that a few years ago he had hit her in the head so hard that she had some internal bleeding and lost her sight. She said that she was a little mad at God for allowing this to happen to her. After telling her that in heaven no one will be blind, I asked her if she ever considered that maybe God allowed her to be blind so that she could see Him. I explained that perhaps, with her eyesight she was too busy to hear God speaking to her and now that she can’t see, she is in a place where she can truly hear and see God.

I also shared with her about a blind man in the Bible named Bartimaeus (Mark 10:46-52). Even though Bartimaeus could not see physically, he was able to see spiritually and recognized that Jesus is the one that God promised to send to pay the penalty of the sins of those who believe and follow Him. In contrast to Bartimaeus, there were many people at that time whose eyes worked perfectly well and yet they still would not recognize who Jesus is.

Then I told Maggie about my friend Obet and how God used his polio to reveal Himself to Obet. Obet, who was not familiar with the gospel, had been basically paralyzed since he was a toddler. This is what God used to draw Obet to Himself. God put it on my heart to share the gospel with him after I saw him stuck on the side of the road and unable to walk. I believe that I would never have seen Obet and my heart would not have been so drawn to him if he had the full use of his legs. Perhaps I would never have noticed him or he would have been busy working somewhere else, maybe too busy for God. What a small price to pay for eternal life, just the temporary use of your legs. In like manner, told her that the temporary loss of her eyesight was a small price to pay if that is what God is using to save her life.

Pray for Maggie heart to continue to be open to God’s gracious call and the gift of salvation. I will get her a Braille Bible so also pray that she will read it and that her spiritual eyes will be opened. You might also pray about having your eyes opened to the opportunities around you and the faithfulness to take advantage of them by making the love and greatness of God known.
Posted by Sean Ransom at 12:49 AM No comments: